So, I started the night crossing town back and forth handling the daily dribble before finally getting back into the city to meet up with a few friends. Drinking ensued at a few venues including my very favorite whiskey bar and .

Eventually, with some of Oz's finest icky burning a whole in pocket, we took a smokey walk a couple blocks back for the show. We managed to get there in time to catch the end of the Whitehorse set. I know nothing about them but the 8-10 minutes I heard seemed promising enough that I'll hunt down some of their stuff in the near term.

Then it was time for Yob. I must admit, I'd been anticipating this show since the day it was announced and had some pretty heavy expectations. There was no disappointment! I thought they played a damn fine set and the sound in "Hi-Fi" on the evening was pretty spot on from my vantage point with my back against the soundboard for the majority of the gig. The drums, in particular, were some of the cleanest, yet powerful I can recall in recent memory.

They didn't play 'Nothing to Win', which I was overly-primed to see, but after starting the set with Prepare the Ground and Burning the Altar, any and all possibility of a let down faded before hindsight ever had a chance. The place was probably only about 2/3 full, so toward the end of 'Adrift', I wandered up the the barrier just in front of Mike for the last two tracks and the sound was just as good up front.

A few minutes after the set, the band hopped off stage and hung out with the few handfuls of people still lingering with drinks and such. They were all very humble guys and seemed to really appreciate the response they received all night and were genuinely appreciative of those of us still hanging around. Both Mike and Aaron mentioned that the show rated in their best performances ever. I ended up with a few happy snaps with the guys and they all took a minute to sign the gig poster. They insist they'll be back! Given the opportunity, I'd be more than happy to hand these guys my dollars quite a few more times.

Here's a pic of the poster: 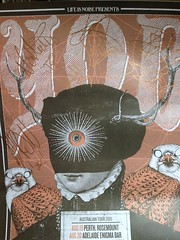 Sounds like a great night. The Adelaide show was pretty similar though we only got 6 songs (it was still a 90 minute set). I don't know their material well enough to comment on the setlist, but we got Marrow and In Our Blood from the new album, and that was it. The final song played was allegedly on they hadn't played in 9 years or something, and it was pretty good. Sound was also great, which was a little surprise since the Enigma Bar is not well known for it's acoustics. Vocals were a little quiet, but that didn't detract significantly.
Top

I was there. It was enjoyable enough. As stated before, I know absolutely ZERO about Yob, so I no idea what to expect going in (OK, in all fairness I had SOME idea). And after all was said and done it was more or less what I had imagined it might be. Few surprises. The set was tight but probably 20 minutes or so too long. Gotta agree on the drumming as it was sensational and definitely a highlight. Still unsure if they won me over enough to run out and nab myself some Yob back catalogue. We'll see.

After the show I stopped at the merch booth and scored a Whitehorse vinyl for $20. One of my friends however, bought approximately half of all the items on display (if not more) and had to be dragged kicking and screaming away by yours truly in the end - I was keen to get a move on seeing as I was parked 700kms away and I have just bought a brand new car and was paranoid about it being stolen.

When I got back home (at about 1:30am) a (recently divorced) girl from down the street whom I've been friends with (and nothing more) for a while, texted me and asked if I was home. I texted back that I'd just walked in the front door and she came over and spent the night and we did the nasty while listening to my Throbbing Gristle cds. So in the end it was a really enjoyable evening. I was completely and utterly unprepared for it to end like that but won't be complaining any time soon.

Oh and I forgot to mention that I had a hot dog and fries from Lord Of The Fries before the gig.
People like me just want to watch the world burn.
Top
Post Reply
3 posts • Page 1 of 1